Summary: Neither red pores nor blue bruising has anything to do with edibility. 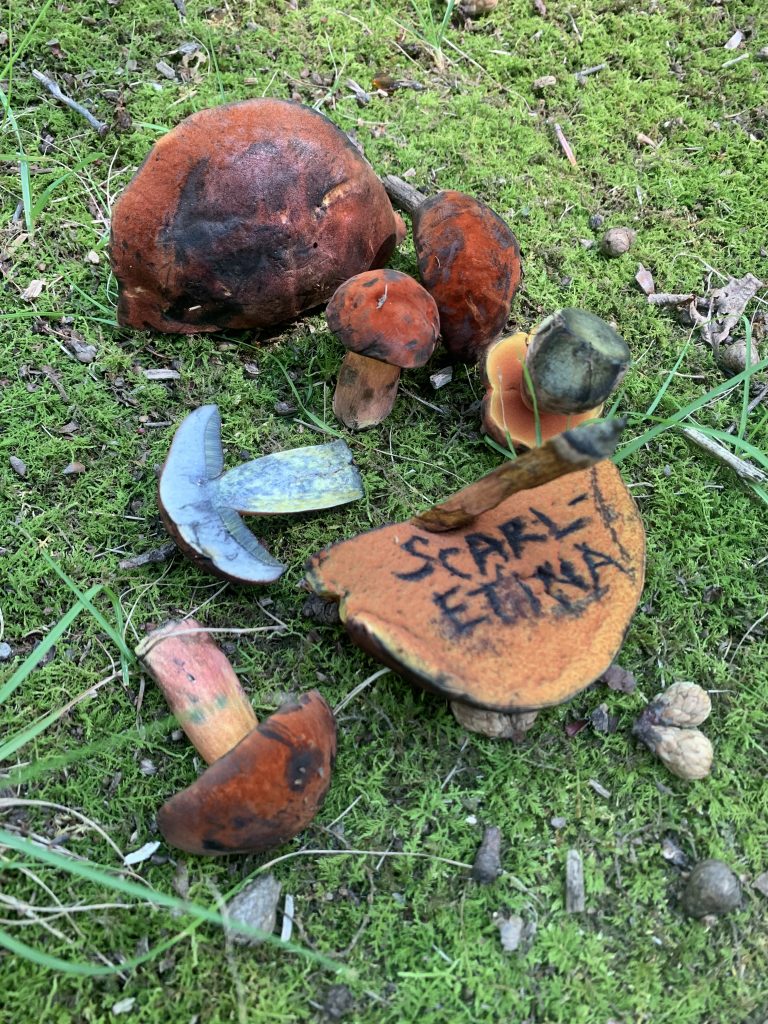 Edible and delicious! One of the oak-loving Neoboletus species. I would have preferred to show the pores in their prime, scarlet-red phase, but this was the only shot I have with the name scratched in. Photo by Scott Pavelle 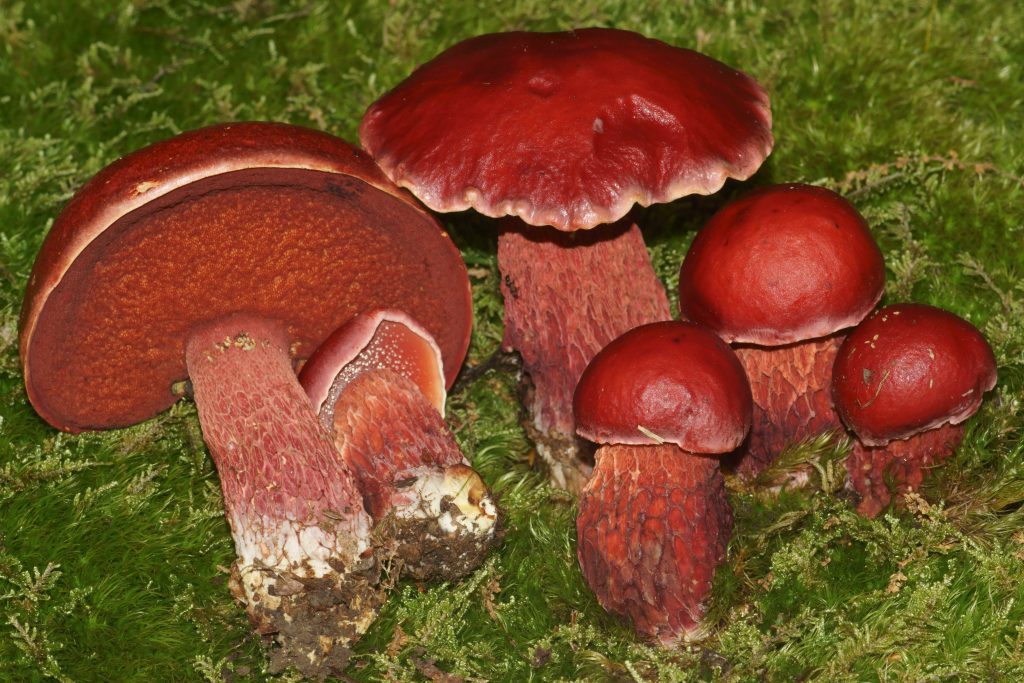 Candy Apple Boletes a/k/a Butyriboletus (or Exsudoporus?) frostii. They have an odd sour tang that many people love, but others cannot abide. Where do you fall on the spectrum? Photo by John Plischke III.

Received lore about foraging for boletes came with a poetic warning: “Satan’s Bolete has a red face and blushes blue from shame.” This was translated to a rule that red pores and blue bruising somehow combined in a way that could make people ill. Modern DNA and chemical studies have debunked that myth. It’s a classic case where coincidence is not causation.

This link goes to an excellent 2003 article on the chemical pathway that causes red coloration and blue bruising in so many boletes. The article goes deepest on Gyroporus cyanescens, but contains the information needed to understand how the system works for for all the North American boletes. Here’s the bottom line. Many boletes contain organic acids that turn red when they oxidize slowly through contact with the air. This is why so many have red in their caps, pores, and stems. Other boletes contain one of several enzymes that buffer [my word as a non-chemist] the reaction in a way that causes blue oxidation instead of red. When you have a mushroom with both the required acids and enzymes, breaking the cells will cause blue bruising.

None of those acids or enzymes has *anything* to do with edibility, and certainly not with psychedelic properties! Check out this article if you want to read about the totally different bluing reaction that occurs with the mushrooms that contain psilocybin.

So what caused the lore? DNA studies have now severed the bad boy “Satan’s Boletes” into their own genus, Rubroboletus. The Rubroboleti happen to contain both acids and enzymes. Thus they happen to have red pores that also bruise blue. But the Rubroboleti are not sick-makers because of the red/blue reaction! They cause illness because they also contain a unique set of toxins such as bolesatine (which has only been proven in some species but is presumed to be in the rest as well).

See how it works? Here are the details from a proper, Bolete Filter perspective [laughs].

So what we have here is a case where coincidence is not causation. Telling people to avoid eating red-pored or blue-staining mushrooms because of the Rubroboletes is like telling them to avoid berries because the world contains nightshade in addition to grapes. It may make sense for utter newbies in a spot where nightshade runs rampant, but… really? 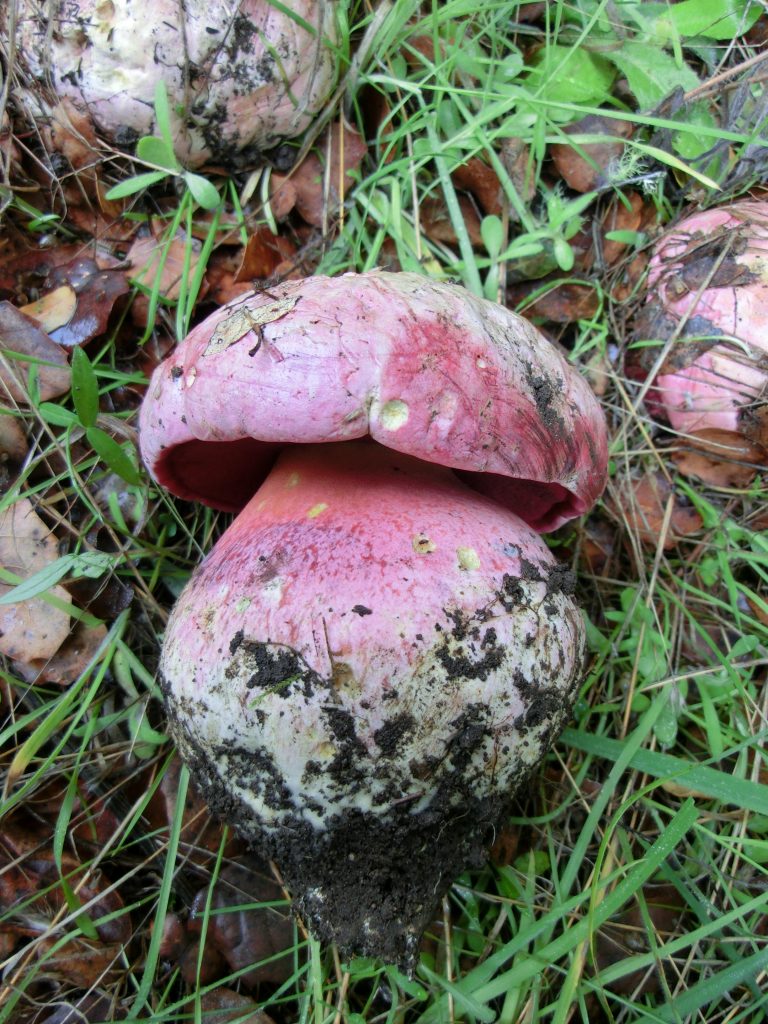 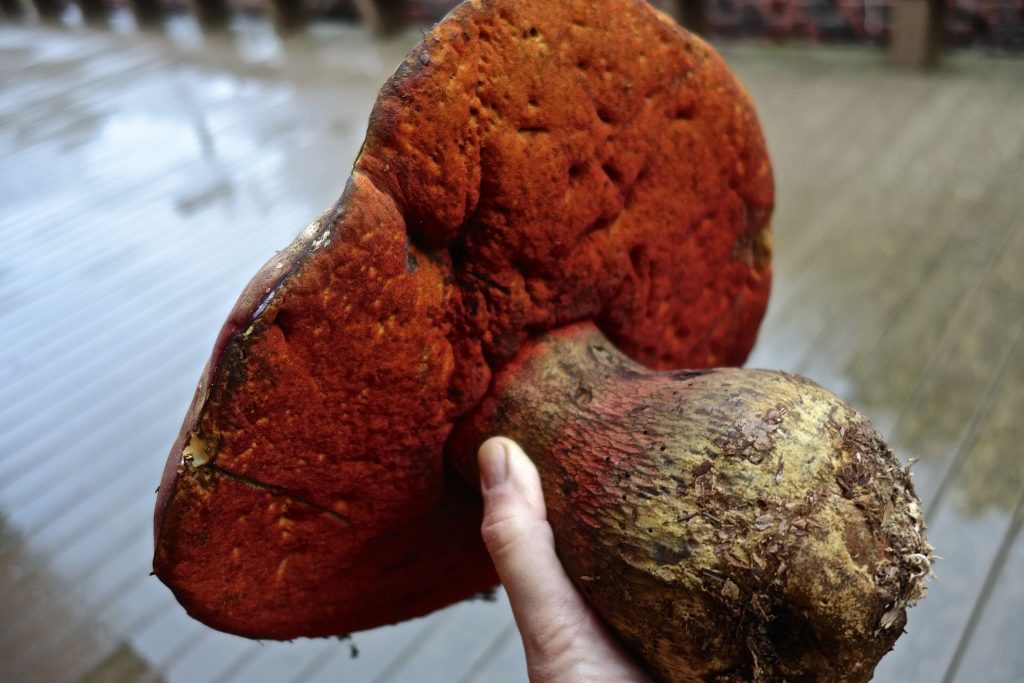 As of this writing, there are eleven (11) “Avoid” species in North America out of more than 330 bolete species. Some species may come off that list, and others may be added, but the proportion is probably close to right. The three worst are in the genus Rubroboletus, and are limited to the west coast. So yes, if you live on the west coast, and you’re ignorant about boletes, and you’re paranoid… the red pores and blue bruising thing might make sense as a warning for your newbies. You don’t have many mushrooms that fit this description in the first place (only 14 species in all), few of them are worth collecting for the table, and the bad actors are really, truly bad.

Everywhere else in the country? Not so much. There are 30-35 red-pored blue-stainers species east of the Rocky Mountains, many of which are truly delicious. That means there is a lot more to lose from a “rule” that filters them out. Next, the dangers such a rule would avoid are much smaller. The entire eastern side of the continent has only two Rubroboletes to worry about – neither of which is a proven sick-maker anyway, and the rule doesn’t even do what it’s supposed to! Yes, we do have some problem children. Three confirmed sick makers (B. huronensis, Sutorius eximius, and Tylopilus griseocarneus), the two Rubroboletes (R. rhodosanguineus and the exceptionally rare R. dupainii) and a few more with evil reputations from the pre-DNA days of yore and lore. But all of those cause much less severe problems than any of the western Satan’s Boletes, and neither the red-pored thing, the blue-staining thing, nor any other rule will reliably catch them out. You simply have to learn what they are in order to avoid them – which isn’t exactly hard because they tend to be both rare and very distinctive.

ONE FINAL NOTE ON THE BITTER BOLETES. There are also twenty-two (22) boletes that most people view as inedible because they are too bitter. All but two or three of those are in the genus Caloboletus or Tylopilus. There is no evidence that any of these are toxic, and there are many people who enjoy eating them because they lack the TAS2R38 gene. Those lucky few tend to enjoy the bitter boletes that ruin meals for the rest of us and, indeed, almost everyone enjoys the meaty and delicious, non-bitter species in Tylopilus. A quick, and totally safe, nibble-and-spit field test will tell you if you have a bitter bolete.

AND A FINAL FINAL NOTE ON THE ONES THAT TASTE BAD. There are also some boletes that smell or taste bad, but are not proven sick-makers. Why not? Because people haven’t done a lot of experimenting on the edibility of things they don’t want to eat in the first place. So you may as well avoid those too. And you should definitely avoid every mushroom that’s started to rot! Duh.

There is no door prize for the person who eats more mushroom species than her next door neighbor. Stick to the good ones in basically good shape. There are plenty to go around.